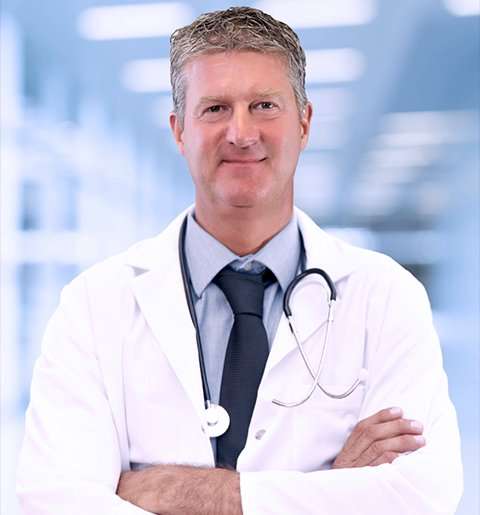 Dr. Sylvain Simard is from Chicoutimi. He studied medicine in Ontario at the University of Ottawa and received his specialty degree in family medicine in 1992 from McGill University.

In 2000, Dr. Simard received training in anesthesia recognized by the Collège des médecins du Québec. During his three years of practice in the operating room at Jonquière Hospital, he perfected his infiltration techniques to counter pain.

In 2004, Dr. Simard confirmed his interest in fine technique with a training course in California with Dr. Berkowitch, plastic surgeon. Since that time, he has been practicing medical aesthetics in Quebec and refining his training with lasers, botox, wrinkle filler, lipodissolution by attending various conferences, clinical internships and advanced workshops.

In 2010, Dr. Simard received training in phlebology (varicose veins) with the renowned Dr. Zummo from Montreal.

More recently, Dr. Simard has added ultrasound to his cortisone infiltration practice and uses PRP (platelet-rich plasma) in musculoskeletal and esthetics. He also followed an innovative training in St. Louis, Missouri with the Blue Tail medical group, experts in the field of regenerative medicine, specific to the treatment of orthopedic problems with bone marrow concentrate rich in stem cells.

As evidenced by his medical studies in France, his numerous internships in Cameroon (Africa) in tropical medicine where he created a charity, Dr. Simard shows open-mindedness, which leads him to always want to to improve.

After a detailed interview and free and informed consent, Dr. Simard establishes with his patient an action plan often spread over several sessions with multiple treatment modalities all at the cutting edge of technology.

Dr. Simard is also a member of the following recognized organizations: The American Academy of Ozonotherapy, Age Management Medicine Group (AMMG) and The Orthobiologic Institute. In addition, as he is constantly on the lookout for improvement and innovation, he is currently studying to earn his Functional Medicine degree from The Institute for Functional Medicine. He already has the title of naturopath from the Canadian Association of Alternative Medicine.